Here’s why October 12th matter so much! 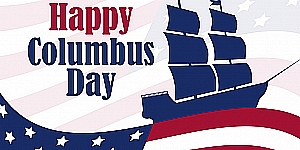 October 12th is not only commemorated in the United States, it is a date that has a high level of importance in the world. However, and despite the fact that in North America it is known as “The day of the race” or “The day of Columbus “, in other countries it is identified by other names, in the case of Spain it is the day of the” National holiday “or” Hispanic Day “, in Chile and Peru it is called” Day of the meeting of two worlds “, in Argentina” Day of respect for cultural diversity”, etc. However, the purpose of the commemoration is the same and is focused on remembering the arrival of Christopher Columbus to the “New World” in 1492.

What did it mean for Christopher Columbus to complete his journey?

It meant the beginning of the European colonization of the American Continent. However, he was not aware of this when he initially arrived at an island, which he himself called “San Salvador” and which is currently part of the Bahamas, also known as Watling Island, as his initial belief was based on the fact that he had discovered a New route to India.

From that moment on, the meeting between Europeans and the indigenous peoples of the American continent began.

How long did it take Christopher Columbus to get there?

After 5 weeks of sailing to the West, Cristopher Colombus manages to land on October 12, but he was not alone, he sailed in the company of 90 men in three ships that had been identified as “La Pinta,“ La Niña ”and“ Santa Maria”. Upon arriving and believing that he had arrived in India, he identifies the inhabitants of the place as “Indians.”

This is the reason why today the second Monday of October is a holiday that commemorates this feat, that’s why Americans have a day to share with their family, rest, go out to different places and take advantage of the first days of autumn.

It is important to keep in mind that many places are closed, including schools, federal government offices and most banks.

Many cities join the celebration by performing parades and different activities, this is one of the plans chosen by families to demonstrate the importance of this day to their children, however, schools usually dedicate a day for students to understand the reasons for this commemoration through dynamic activities that allow them to have a greater understanding.

It is believed that Columbus was Italian and for this reason the Italian immigrants who lived in different cities of the United States were the first to hold this celebration. It is for this reason, that in New York in 1866 they claim that this holiday be declared, the same happens in San Francisco two years later., Until finally in 1937, October 12 is proclaimed as Columbus Day by the President Franklin D. Roosevelt.