How Criminals Target You At ATMs 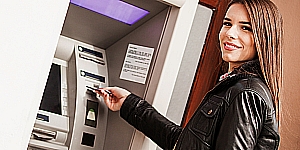 Since their appearance in common day life, ATMs have become a commodity and even necessity for some people. ATMs or Automatic Teller Machines have been around since the late sixties and ever since then they have become the best way for people to make cash withdrawals from their bank accounts in a fast and easy manner that do not involve having to stand in line inside of a bank.

ATMs usually work by two fundamental security steps: reading the card of the bank account owner and their personalized and secret PIN, a short password used for these transactions. The combination of the magnetic band in the card and the PIN will allow the client to make quick and simple transactions such as cash withdrawals, checking their account, and even check balancing. But if history has taught us something is that wherever there is money involved, there is surely going to be criminals trying to steal that money.

Since their creation, ATMs have been the target of several criminal attempts to steal the money they contain. Having access to sensible information from a bank and their customers, people have tried all sorts of things to gain this by all sorts of creative means. From physical attacks to an ATM such as trying to steal the whole machine altogether, threatening people while they are making a transaction, and more sophisticated methods such as stealing the card and PIN of a person to empty their bank accounts.

“The combination of the magnetic band in the card and the PIN will allow the client to make quick and simple transactions such as cash withdrawals, checking their account, and even check balancing. But if history has taught us something is that wherever there is money involved, there is surely going to be criminals trying to steal that money”

There are several ways in which criminals target unsuspecting victims to steal their information and money. Here, Premier Consumer is going to explain the most common ones that threat your physical and financial security. We recommend to take a close look at these security tips and apply them whenever you need to use an ATM beginning with the simplest method and then moving on to the more sophisticated ones. We will also give you some countermeasures you can use against these types of criminals.

The simplest way for a criminal to steal money from an ATM is to jump on someone who is in the process of using the machine or just finished. They will force the person to make a withdrawal or simply ask for the money that was just taken out. All this people have to do is pick an ATM that is located in a low-traffic and poorly lit area and stake out, usually at night. The first recommendation we give you would be to simply avoid using these ATMs and go for machines that are located in a more public and trafficked area.

During the transaction, try to be aware of your surroundings and look out for suspicious behavior. Most ATMs come with a mirror on the side that will allow you to check behind your back to see if there is someone snooping. Be wary of strangers that offer to help you, they may be after your card and pin or may snatch the money out of your hands as soon as you withdraw it. If you have a problem with the machine try to contact the bank directly instead of having someone else help you. Do not count your money at the ATM, just wait until you are in a safe place, comply with them and then report the incident to the authorities and your bank; your life is worth far more than a few dollars.

Read also Money Does Not Buy Happiness for more information.

On the more technological side, there are criminals that act as ghost in the sense that most victims never see them coming. The most advanced and modern form of ATM crime is done through a device called a skimmer. These are little pieces of equipment that can read the information on the magnetic band of your card and steal information from them like their magnetic pattern and the card’s number and expiration date. Skimmers can be placed in the ATM’s card slot and some of them are so small that most people do not notice that it is there. Hidden in place skimmers will record the data of any card that is inserted in the machine and then the criminal will simply download this information and clone your card.

Along with skimmers, criminals often place small hidden cameras on the ATM pointed towards the keypad in order to learn their victims secret PIN. With a cloned card and their respective PIN all the criminal needs to do is go to an ATM or any store with a point of sale and swipe the card to withdraw cash or make purchases.

Another method criminals use to obtain your secret PIN is by installing a fake keypad on top of the original. The top one will record all the numbers typed into it and then all the criminal needs to do is download this information and clone the card.

Read also Mobile Banking Apps: What They Are and How You Can Start Using Them Safely for more information.

What can you do to fight off such sophisticated methods? You can start by checking the ATM’s hardware for signs of tampering like scratches close to the keypad or things that look out of place; especially if it is a machine you visit often. Keep a close eye on your bank account movements and report any unusual or unidentified activity to your bank immediately. The sooner you notify the proper authorities the better their response can be. Most banks do not hold their clients accountable for these crimes and in most cases will refund the money that was stolen.

Changing your PIN on a regular basis is another way to fend off these types of attacks, try to do it at least once a month. Try to always memorize it and never write it down on the back of your card or piece of paper you carry with you.

Banks and ATMs manufacturers are continuously to improve the level of security in their machines. They have installed anti-skimmer technology on their hardware that blocks the signal the skimmer uses to read your card. Many banks around the world have also began to issue smart cards that come with an integrated microchip. ATMs now read the microchip instead of the magnetic band of the card because the chip is virtually impossible to replicate. They also offer an SMS service that notifies their clients whenever a transaction has been made. Ask your bank if they offer this kind of technology and ask for a smart card if they do.