No Financial Freedom Means No Freedom At All 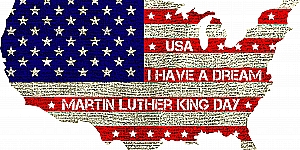 On August 28th, 1963 in Washington D.C. Martin Luther King Jr. stood up in front of more than two hundred thousand people to the deliver a speech that would go down in history:

“I have a dream that my four little children will one day live in a nation where they will not be judged by the color of their skin but by the content of their character. I have a dream today”

M.L.K. Jr. fought pacifically for the civil rights of African-Americans, he battled to eliminate segregation in the society, he pursued racial justice, he dreamed about the “riches of freedom and the security of justice” for every citizen in the US. But, above all, he wanted to guarantee each person the unalienable rights that are established in the Constitution and in the Declaration of Independence of the United States: life, liberty and the pursuit of happines.

Along his struggle, M.L.K. Jr. realized that one of the most important aspects to work for was economic justice and race equality for every citizen. He made some proposal with the intention of abolishing poorness and helping every person to accomplish financial independence. That fight went beyond any ethnic discrimination. He understood that racial parity and the elimination of poverty could only be achieved with better economic justice and equality. He worked and fought for freedom in every sense of the word and regarding every aspect he could cover: civil rights, politics, economics, education…

“That fight went beyond any ethnic discrimination. He understood that racial parity and the elimination of poverty could only be achieved with better economic equality and justice.”

The Freedom Budget was a plan proposed by the A. Philip Randolph Institute in 1966 and supported by Martin Luther King Jr. to abolish poverty in the US.

In general terms, the Freedom Budget establishes that full employment should be provided for all people which are able and willing to work, salaries should be decent and living standards for the ones that cannot work should also be proper. In this economical plan other civil rights were considered too, such as: Appropriate medical care and education for all Americans should be provided, discrimination in ghettos should be abolished and decent houses should be given to each citizen.

M.L.K. Jr. believed that following these recommendations would get every citizen in America closer to financial independence; therefore, the abolishment of poverty and racial equality could be achieved. Sadly, this plan was not accomplished, mostly because it required huge investments in development, infrastructure and education; in that moment, a big amount of the Federal tax incomes were being used in the Vietnam War.

There are a couple of financial lessons to learn from Dr. Martin Luther King Jr.’s legacy.

No financial freedom could mean no education for your kids, unpayable debts, anxiety and consequently, diseases. No financial freedom could mean no life at all. That’s the reason why each person should be responsible for his/her own financial situation: Inform yourself about the possibilities and options of the banking system, plan a budget and use credit cards appropriately if you have them.

If you are going through a complicated economic situation and you feel in disadvantage, do not hesitate to contact an expert to evaluate the support options the government could offer you. As Martin Luther King wrote: “Freedom is never voluntarily given by the oppressor; it must be demanded by the oppressed.”; therefore, don’t wait for somebody else to come to your place and give you financial freedom or options, go out there and seek for it.

How to Make Effective and Better Decisions

Martin Luther King Jr. was a man of faith and another important lesson regarding finances he gave us was that faith can help us take the extra step when we are planning to take a risk or to make investments on the near future. Consider all the options there are: saving, retirement or investment plans; instead of expending your money in unnecessary objects, contemplate investing in your own business.  Inform yourself enough before taking a life-changing decision.

Overcoming Obstacles Through Commitment and Persistence

Dr. Martin Luther King Jr. taught us several lessons; he was the voice of the people that had no voice or hope to fight for their own rights. He made a huge advance regarding civil rights, justice and equality. But what could be consider, maybe, one of his biggest contribution was to show people how important it is to stand for one’s believes, to be truth to oneself and to defend freedom above all, as he once said: “There is nothing in all the world greater than freedom. It is worth paying for; it is worth losing a job for; it is worth going to jail for. I would rather be a free pauper than a rich slave. I would rather die in abject poverty with my convictions than live in inordinate riches with the lack of self-respect.”