The Meaning of Thanksgiving Day. 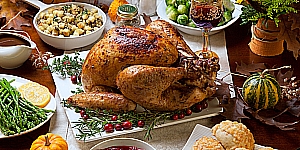 Just behind the 4th of July, Thanksgiving might just be the most American holiday there is. At least culturally, it’s known all around the world as the day when American families come together and have a feast, traditionally starring a turkey. The fact of the matter is that Thanksgiving is the only non-political holiday that is observed by all Americans regardless of their religion.

The Meaning of Veteran’s Day

The origins of Thanksgiving day can be traced back to the 16th century, even before the first European settlers made their way to the new world. It is believed by historians that modern-day Thanksgiving started out as a religious celebration. Back in the day people would have feasts whenever they experienced something extremely good that seemed like a benevolent act of God.

So when the first settlers came they brought with them their customs from the old continent and began to celebrate yearly harvests when they were good and plentiful. As time passed by, the yearly tradition of celebrating the harvest with a feast began to settle into the lives of people and eventually it would be decided that a day to give thanks for all the good things that happened during the year would be set on the fourth Thursday of November.

Whether the story of the pilgrims sharing a feast with Native Americans is true or not remains debatable. The fact is that the holiday stuck on and it is still celebrated to this day. Modern agricultural technologies have made it easier to have good harvests so that is not what most people are explicitly celebrating. Instead, the holiday has become an occasion to give thanks for all the good things in life regardless of what historical facts may lay behind it. And what started out as a strictly religious holiday has now become a federal one.

Thanksgiving is now celebrated not only in the United States but also in many other countries around the world. From Canada to the Netherlands, and even Japan, all these countries observe a similar holiday. Canadians celebrate Thanksgiving on the second Monday of October, orthodox protestant Dutch celebrate it on the first Wednesday of November, and the Japanese do it on November 23th. Their traditions and how they do it may vary but the essence of the holiday remains the same.

The idea and true meaning of modern-day Thanksgiving is just that, to be thankful for what we have. It doesn’t matter on what part of the country you live, the color of your skin, what you believe in, or your social status, we all have something to be grateful for.

The United States just witnessed an unprecedented presidential election with an outcome that many thought impossible. The only time Americans have been more divided than they are now was back during the civil war. While some people see the results of the presidential race as something to be grateful for, there are others that would disagree and see the new president of the United States as something terrible. But even if that is your case, there are things that you should still give thanks for.

Even if some of them don’t like the new president very much, Americans still have many reasons to be thankful for. We are now living in a historically unprecedented time of peace in the world. Even with conflicts rising up in the Middle East and Isis still on the loose, the truth is that the vast majority of the countries of the world are at peace with each other and that is definitely something good and worth being thankful for.

Modern medicine is something to be grateful for. The fact that doctors were able to control and hold back and outbreak of Ebola is quite amazing. A decease that could have caused a pandemic and killed hundreds of thousands of people was contained and cured. Research for better cancer treatments are on the rise and deceases that were considered lethal like AIDS are now treatable with a cure just around the corner. Medicine has taken amazing leaps forward during the first years of the twenty first century, imagine what is yet to come.

Food is available to the majority of the population of the world. Surely there are still people who are hungry out there but the number of famished population has decreased significantly thanks to worldwide efforts. People are caring more and more about those who are less fortunate and are doing more things to help them.

cSocial issues have also taken an amazing leap forward these past years. While some of these ideas are still met with some resistance, more and more people are beginning to support social equality for women, ethnic minorities, LGBT people, and other groups that seemed to be at some kind of disadvantage before.

Modern technology is something to be grateful for. The fact that you can communicate with someone halfway across the globe in an instant is simply amazing. The world and its people are now more interconnected than ever before and this connection is not slowing down, it’s actually getting faster and faster by the minute.

Even if things seem bad and the future looks gray and bleak, remember that you can still be grateful for many things. Things that most people take for granted such as family, friends, their jobs, their pets, their loved ones, the small things that make life pleasurable and worth living. Morning coffees, ice cream, cakes, movies, music, concerts, laughing with friends, a shoulder to cry on, vacations, traveling, staying at home, days off, and lots of more stuff.

So this year make sure that you spend Thanksgiving with those who are most important to you, those you hold dearest for they are the reason you should be thankful for. Go ahead and celebrate that you’re alive and that you are a part of this wonderful world and enjoying every minute of it. Say thanks.