The Worst Cyber Attacks in History. 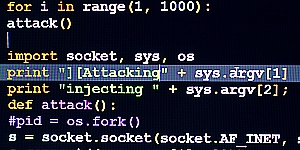 Let’s be honest, in today’s world we should all be afraid of hackers. They can easily take advantage of weak passwords and poorly maintained computer systems to steal confidential information, hijack your identity or -if they get access to your financials- steal your money. But for some hackers, gaining access to personal accounts is not enough, so they target governments and huge corporations, either to rack profit for themselves or wreak havoc on their enemies

“for some hackers, gaining access to personal accounts is not enough, so they target governments and huge corporations”

In this article, Premier Consumer provides some of the biggest computer attacks on record:

In October 2014, employees at Sony Pictures found that they couldn’t access their computers, instead, all they saw on their screens was a glowing red skull and the words “Hacked by #GOP”. Calling themselves the “Guardians of Peace”, the hackers threatened to release a vast amount of the internal company data unless their unspecified demands were met. It was thought that the hack was related to their soon-to-be-released comedy, “The Interview” (which mocks North Korean leader Kim Jong-un), Sony was forced to cancel the movie’s theatrical release.

Despite this, hackers released the sensitive data, allowing newspapers and competitors to dig into the company’s inner workings and peek into their future projects. This was a disaster for the company, but there’s a silver lining, the publicity generated by the attack made “The Interview” a top-selling movie in online stores, allowing Sony to break even on the movie despite having launched the movie in only a few theaters.

This attack targeted Home Depot’s payment data, gaining the hackers access to over 56 million credit cards stored in the retailer’s systems. The numbers and identifications of these cards became available to the hackers after they introduced custom-made software to the company’s system.

The hack remained in Home Depot’s computers from April until September of 2014, collecting data for the hackers, who appear to be from Eastern Europe. It targeted the self-checkout counters at their stores in the United States and Canada.

The company took measures to contain and counteract the attack once it was discovered, offering free credit monitoring for clients who had bought in their stores since April. However, as it happens with breaches of this nature, trust in the company’s ability to protect customer data took a serious hit.

The Home Depot hack was huge, but it’s not the biggest we’ve seen. In 2007, TJX, the close relative like Marshalls and T.J. Max, admitted they had suffered a breach that compromised the information on 94 million credit cards.

Hackers had been taking information since 2003, when they accessed TJX’s network by intercepting wireless communications in two Marshalls stores in Miami. Even though some people were charged for using credit cards loaded with the stolen data, the hackers themselves were never found.

Settling with the affected customers cost TJX around $256 million, but analysts estimated that the actual cost to the company may have reached up to $1 billion, including other legal settlements and lost sales.

This is widely regarded as the biggest computer hack in history. It targeted the Saudi oil company Saudi Aramco, one of the largest in the world (it provides around 10% of the world’s oil production), and managed to disrupt their operations for five months.

The hack infected the company’s millions of computers because one of its IT employees opened a spam e-mail. Once most of the employees were out on holidays, the attack kicked into gear, wiping or completely destroying most of Aramco’s computer systems.

The company had to buy massive amounts of new hard drives, managing to partially disrupt the world’s supply (in fact, if you bought a hard drive between September 2012 and January 2013, you paid a slightly higher price for it because of this).

Read also 10 Actions You can Take Right Now To Improve Your Computer Security: Am I really at risk?

A group calling themselves “Cutting Sword of Justice” claimed responsibility for the attack, stating they did it because of the company’s support of Saudi Arabia’s authoritarian regime. The company managed to continue pumping oil throughout the ordeal, but they were forced to do their administrative work on paper for months.

What Do You Think About Hackers?

We should all be afraid of hackers, and for good reason, so make sure to do everything you can to protect yourself. If you just manage your private accounts, you’ll probably be fine as long as you keep some basic security measures, like creating secure passwords, keeping your software updated and ignoring spam emails. However, if you are managing a company that depends on the use of computer systems, then you must make sure to invest in computer security. That way you will protect your company’s systems from damage, keeping your confidential information private, your operations uninterrupted and your mind at peace.