Why do we call them credit cards? 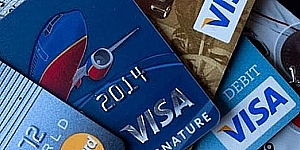 The words “credit card” gives the connotation that you have this card as if it was a “credit”, or something that you have deserved or accomplished.

Shouldn’t we call it instead a “Debt Card”?

Would it deter anybody from using it if instead of being called a credit card, it was called debt card?

Do you remember also how a few years ago all credit cards pretty much looked the same? And do you remember how all of a sudden consumers started getting them in colors, silver, gold, platinum?

Did you know that platinum and gold cards typically charge you the same or higher rates than most credit cards?

The Federal Reserve regularly publishes their findings for revolving consumer credit in the United States. The meaning of revolving is debt that is not paid in full every month, typically credit cards.

According to them, the amount of revolving debt in the United States for 2004 was 796 billion dollars. Your can find this report and their update at out outside resourcespage.

Three of five American families can’t pay off their credit cards each month, and the average balance is $12,000, which is one-fourth of the median household income.

That is an average of $7,100 per person average credit card debt, and if you made the minimum payment credit card companies usually request of 2% or approximately $142 it would take 93 months, or 7.75 years.

The truth is that if you made the minimum payment on a “Credit Card” you are really keeping yourself in debt.

We hope you will think twice before getting another credit card that you might not need.

You can go to our calculatorspage to learn how much it would take to pay your debt off.

Also, you can request a Free Analysis Now to asses your specific situation.