Why Women Can And Should Lead Companies? 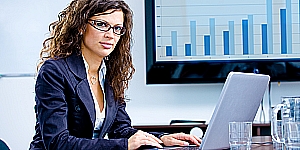 Since the late sixties and the beginning of the seventies, most of the women all over the world have been dedicating part of their lives to fight for gender equality in different areas: social rights, education, politics, economics, businesses… little by little they have been building their own paths and they have shown they are completely capable of doing anything they decide to do in an outstanding way. At Premier Comsumer, we believe in women as they have infinite things to contribute with to any organization, so we made this article to prove that women can and should lead companies.

It could be said that, in this century, after years of struggle, in some cultures women have finally destroyed stereotypes related to the kind of work or activities they are capable of doing, they have mastered professions that were mostly “men work”, and they have done it successfully.

As a consequence, nowadays you can find in almost any king of enterprise gender mixed groups and woman CEO’s¾you can check Forbes lists and surveys¾. Do you wantmore interesting extra information? Even man stereotypes have changed:there are now ‘stay-at-home dads’ which are men that decided to leave aside their professional careers in order to be in charge of the children and the house work, so that their women companion can be the ones dedicated to professional development and raising the household’s income.

Several researches, including the ones done by Catalyst, In Power Coaching, have demonstrated that enterprises where working woman held more than 30% of the leadership positions are more successful and profitable.

“Enterprises where working woman held more than 30% of the leadership positions are more successful and profitable.”

First, let’s talk about gender equality: why is it important?

According to an investigation carried out by World Bank Group, diminishing the gender gap will have a positive impact in the development of the countries. The Report stablishes that it is important to reduce the obstacles of accessibility for women: if they have access to good health services, education and the possibility of professional progress, they will be very helpful for their communities. Gender equality will allow women to use their abilities and capabilities appropriately in order to produce better results and opportunities that can be enjoyed bynext generations; for example: mothers that are well nurtured and educated will have a direct and positive impact on their children’s growth, and those kids will be the ones in charge of the development and innovations in the future. As a consequence, it could be said that gender equality would increase economic efficiency.

Real Also: 5 Tips To Make Purchases Like A Pro

By the time that this Report was presented ¾2012¾, data shown that around the 40% of the world work force were women and also half of the students at the universities. It could be said, then, that this big amount of working women on the right place, doing the right job will increase productivity and, as a consequence, the economy would have a positive boost.

Now, could you imagine the effect these women could have leading enterprises?

Researches done in the lasts years have shown the positive effect women can have when they achievea meaningful performance developing leadership position in any enterprise. As the founder of InPower Women, Dana Theus, says the leadership style women have ¾which is very unique and very feminine¾ produces more profitable, sustainable and productive enterprises.

According to an investigation held by Catalyst, companies with three or more women board directors, have better financial outcomes. A comparison was made between those enterprises with the ones that have less than three women board directors; the first ones surpasses the second oneson 16% regarding Return on Sales (ROS) and 26% regarding Return on Invested Capital (ROIC). A higher difference in the statistics was found when the comparison was made with men-led enterprises. When companies have women in senior leadership positions, the outcomes are very similar.

Catalyst report also shown that women have greater leadership competencies than men. In the survey made, women outperformed men in 12 of the 16 items considered.

Read Also: Women And Retirement Planning: What To Do.

Other studies have shown that these kind of women usually are determined, open and willing to learn, they value cooperation, they know how to balance their roles (e.g.: as mother, as wife, as director…) and they have confidence in themselves and their capabilities.

Great examples of the positive impact women can have in businesses are:

When women fulfill themselves professionally, they feel empowered and useful; they project thosefeelingson their families, on their communities, on their societies, on their towns and villages raising better boys and girls that will become men and women of good that will clearly understand the importance of the role of women in the development of our countries and, as a consequence, of the humankind.That is what some people call the Women Effect.