The Meaning of Veteran’s Day 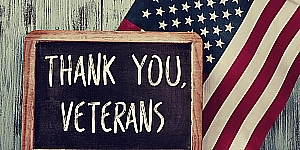 If a person has to work during Veterans Day they will probably get paid holiday pay in addition to their wages. During this holiday most non-essential government offices are closed such as the post office.

Given the nature of America’s culture there are a few things that usually happen during Veterans Day. The most common thing is that stores and businesses will offer special treatments and discounts for veterans during this day. A few examples of this are restaurants serving veterans for free, free haircuts, free oil changes for their cars, and lots of other special offers.

All of these special treatments and discounts for veterans are part of the Thank a Veteran Movement. The idea is to thank veterans for their service to their countries and ensuring its freedom and prosperity. The movement has spread to countless businesses throughout the country.

7 Simple Advices To Organize Your Time for Success

Other businesses try to exploit the fact that people don’t have to work during this day and will put out special holiday promotions during this time, especially if the holiday falls on a Saturday or a Sunday because of the long weekend.

While Veterans Day is meant to celebrate and thank the heroes of the nation, it should also be to get to know the problems most veterans suffer when they come out of service. While they were serving their country life also went by and the civilian world is very different from life in military service.

Many veterans lack the basic financial knowledge they need once they get out of service. Both high schools and colleges aim to teach skills that lead to a degree instead of basic life skills. When veterans come out of service they lack the basic skills needed to handle themselves financially and they also have to deal with their complicated payment and benefits systems.

Even before leaving the service managing their money can be difficult. Many privates face great difficulties managing their money when deployed and many of them have families back at home that they must support. Think of paying mortgages, bills, managing investments, and saving from a combat zone overseas.

No Financial Freedom Means No Freedom At All

The worst part of this is that very few people realize that this is a problem many veterans have to face and so there’s little help for them out there. There are some programs that have begun to see the needs of veterans and are trying to change things so they can manage their money more easily and are able to come out of service and live their lives without struggling with money.

So next time you’re thanking a veteran think of all the things they have gone through and the problems they still face even after they have completed their service for the country. Honor and thank heroes by making their lives easier.